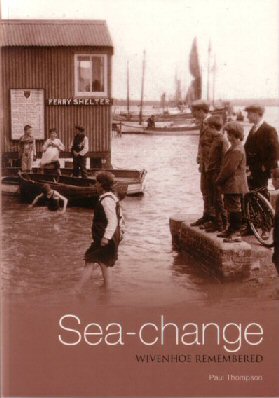 Sea Change: Wivenhoe Remembered was published in October 2006 and is available from Wivenhoe Bookshop

Here are the names of all the contributors to the book:

Tony Allcock, born Colchester 1938, came to Wivenhoe in 1959 and runs the Allcock and Stevens electrical and television shop.

Colin Andrews, born Reepham, Norfolk 1940, came to Wivenhoe in 1967. Worked as a railwayman before running the Station Hotel in Wivenhoe. Today a housepainter and builder.

John Ashworth, born Luton 1938, came to Wivenhoe 1973 as Professor of Biology at Essex University, Chief Scientist to the Cabinet Office and Chairman of the British Library.

Joyce Blackwood, born Wivenhoe 1928. Daughter of a yachtsman, became a teacher and a pioneer woman sailor.

Brian Buckle, born Suffolk 1933, came to Wivenhoe 1935; father head horseman on Wivenhoe Park Estate. Worked on the Estate from 1947, rising to be foreman.

David Burrows, born 1940 and Jean Burrows came to Wivenhoe 1986 and ran the Post Office at the Cross for 20 years.

James Dodds, born Brightlingsea, 1957, moved to Wivenhoe 1995.  Son of an artist, trained as shipwright before going to Art School.

Mike Downes, born 1940, has lived Wivenhoe since 1980. Photography and printer. Since 1992 Warden of Nottage

Jim Dutton, born at Sunnymede Farm, Wivenhoe 1934. Took over from father who farmed there from 1931.

Hilary Harvey, born Rowhedge 1950, but family worked in Wivenhoe shipyard. Has memories of sport in Wivenhoe

Bill and Enid Heslop, born 1936 and 1938, both from County Durham, moved to Wivenhoe 1963. Bill is an artist and retired former art teacher.

Charles and June Sansom, born in 1919 and 1923, came to Wivenhoe in 1948.  Charles a shipyard plater, June worked in electrical assembly and later at Essex University.

Dave Weatherall, born Pembrokeshire 1937, came to Wivenhoe in 1957. Worked as baker then electrician.

We wish to thank the following for also giving interviews for the project:

Marjorie Barton, born Amersham 1928. Moved to Colchester in Second World War, then Wivenhoe until 1965, then to Walton. School cook. Re-trained as a potter, creating the Wivenhoe Collection.

Joan Busfield, born Moreton-in-Marsh 1940, grew up in Oxford. Came as research assistant to University in 1965, now Professor of Sociology.

John Dowden, Came to Wivenhoe as the first student at Essex University, arriving from Cambridge with his supervisor. Lecturer in Mathematics Department from 1965, becoming professor. Organist at St Mary’s.

John Greenman, check when and where born. Lecturer at University in Mathematics from 1967, moved to Valley Road Wivenhoe 1970. Active in local Labour Party.

Leslie Kemble, born Wivenhoe 1914. Builder and fiuneral director since 1928, at first for Barrell firm, which he took on from 1962. Built many Wivenhoe houses and buried many Wivenhoe people.

David Lee, check when and where born. Lecturer in Mathematics at University from 1966, moved to Valley Road Wivenhoe in 1973/4. Active in local Labour Party.

Canon Bill Loveless, born Colchester 1921. Father director of Wivenhoe gravel pit company, moved tio Wivenhoe 1925. Sent to school in Colchester and then boarding at Framlingham. Lived in Colchester. After his own marriage returned 1946 to run the pit, until decided to sell business and become Anglican clergyman in 1970.

Ralph Moss, born Colne Engaine 1913. Seaman, trained on Cutty Sark, then on oil tankers until 1931.Moved to Wivenhoe 1936, started grocery round from own smallholding. 1942-49 in India, various other military jobs. Driver for Cedrics 1960s.

Gabriel Pearson, born London 1933. From 1965 Lecturer, then Professor of Literature at University.

Paul Walker, born Glasgow 1941. In university administration since 1962, including Kampala. Came to work at Essex University 1971, mainly in Admissions, living in Thorrington.

Roland Wheeler, born 1918, fostered by Barnardos in Cambridgeshire. Came to Wivenhoe as soldier 1940, met Peggy, married 1945 and stayed. Worked at gravel pit, and then own concrete block company in Clifton Terrace; from 1980s builder.

We are also grateful to the following recorded in groups or in brief recordings at special Wivenhoe events: